When I say that Australia is a car-centric society, I am not overstating it. For decades our national identity has been tied to cars - From the 'classic Aussie argument' of Holden Vs Ford being played out over barbecues and beers; to fathers and sons with little to discuss except how the car is driving; Australians are obsessed with automobiles. They are mass consumers of everything car related - Particularly things which they feel 'personalise' their cars inside and out. In Perth, personal number plates are a common sight and there is less restriction on the number of letters you can have than in say, Sydney. It's not uncommon to see things like a Lancer Evo (I had to Google that, I nearly wrote Nissan Evo) with plates reading ENVEEME or even dilapidated, first car Toyota hatchbacks with names and birth years serving as fair warning to anybody wanting to avoid youthfully precipitous motorists. Interest groups, sports teams, town councils and charities all offer affiliated number plates to the public. It's easy to spot an animal lover by their RSPCA number plate or a Collingwood supporter by theirs.

Cars have become key components of Australian's own definition of identity, particularly in Perth. There's a real sense as you approach driving age that like losing your virginity, one is merely existing until they pop that cherry. As I mentioned before, the word Freedom gets thrown around constantly when most Australians talk about cars. Which they do. Constantly. Cars are not seen as a privilege or transportation. Transport is what people do on public buses and trains. No, cars are seen as a right and consequently anybody not enamoured of cars is a threat to their very sense of normalcy and self. Look through the photo collection of your average Australian family and you will find photographs of cars. I've spent half of my life watching people 'readjust' their perception of me when I say I have never driven a car. They conclude I must either be disabled or some kind of anarchist. Here, you are your car. To reveal that you voluntarily have no car is akin to screaming, "I AM THE ENIGMA!" before vanishing in a puff of smoke mid-conversation. Why are Australians (Perth in particular) this way? This passion did not manifest fully formed, it developed over time and I think I understand the reasoning behind it. 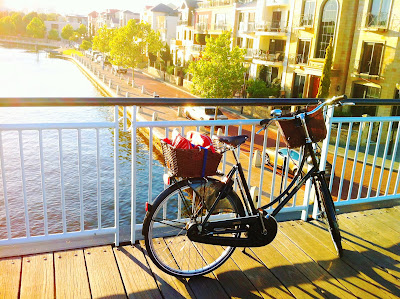 The sheer scale of Australia, the harsh conditions and especially in Perth, the isolation - has helped create a national car mythology. Much like America built its national identity on the mythos of the frontier (I'm referring specifically to the parts of their national identity that butt up against other national identities, like - America: International Sheriff, gunslinger for hire, straight talkin' and sharp shootin'.), the currently dominant Australian cultural identity (by which I mean mostly white, mostly middle and working class men) was built on a foundation of the Bushranger/Explorer myth - the outlaw, the reckless lone adventurer, wandering the vast spaces between pockets of civilisation. There's a strange paradox of rebellion tied to the absolute conformity of car-ownership in Australia. The car has replaced the journeyman's horse yet he still likes to think of himself as straddling the margins despite the ubiquity of car ownership. The very act of travelling is displaying a 'true blue' spirit and exhibiting your toughness and independence as an Australian. Even though most of us are no longer travelling through harsh terrain, the untamed heart of the country looms large in our consciousness, implying every trip is an adventure through adversity.

Australia is a country that in the 1970s began producing and strongly identified with the 'Mad Max' films. The first movie of the series essentially posed the question, "What would happen if we ran out of petrol and cars ruined the world?!" and replied with, "The answer is MORE CARS!" By the end of the 20th century, the family car household had become the 'one car per occupant' household. At the dawn of the 21st Century, Japanese car culture (again, via cinema) began to seep into the Australian consciousness and cars as expression of youth identity had a resurgence. My first years of night-clubbing and pubbing were punctuated by the booming sound systems, rear spoilers and neon lights of Japanese influenced, credit purchased cars cruising the inner city streets. Then something different happened. Gen-Y abandoned road trips in favour of international flights and there - they fell in love with 'The City'.

Globalisation, travel and internet access fed our inferiority complex (Our cities were not 'city' enough! Other people were living cooler lives!) and combined with a period of expansion and overall economic growth (more cafés, apartments, city developments) to make an entire generation long for the idea of urban life. As a nation often struggling to reconcile cultural identity, we're prone to copying others, especially if they seem to offer something more sophisticated than our embarrassingly agrarian past. (There's nothing wrong with agriculture or country living - indeed, they are essential, but younger Australians have actively rejected it for a couple of generations now. A different can of worms for a blog not dedicated to bicycles.) It makes my life easier, as a 'Confirmed Pedestrian', that these shifts are taking place. Whereas 10 years ago I was having to justify my culturally odd disinterest to strangers at technical college parties, now the revelation I have never been behind the wheel of a car usually provokes interest rather than disbelief. Cars are still a big part of Australian culture but a quiet revolution is taking place. The giant 'Holden' shop which at the millennium sprung from the city centre of Perth, selling car branded g-strings along with the Playboy seat covers and fluffy dice was swiftly, brutally replaced not a year later by an Apple retailer. The car shop never reopened within the boundaries of the city shopping district, the car lifestyle accessories being firmly pushed out to the suburbs where car culture still thrives even as bicycle and pedestrian pathways form around them. Slowly, the city becomes a place less for cars and more for people. 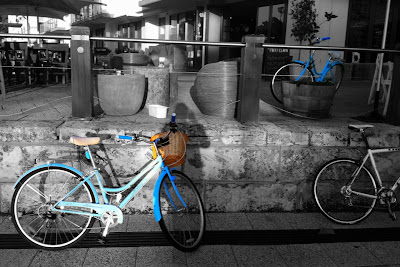 After escaping Perth with her bicycles intact, Fat-bottomed Girl Jen is busy making the rockin' world go 'round in Tasmania - just like those Bohemian Rhapsody guys.